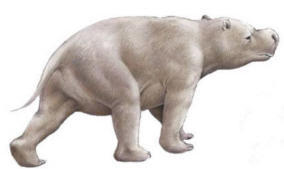 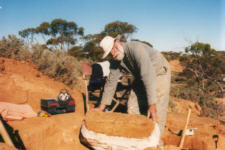 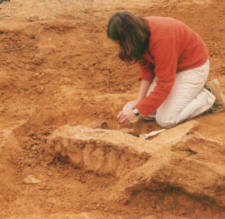 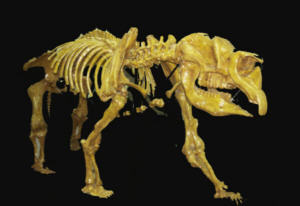 A Megafauna Fossil Display may be enjoyed at the newly restored Burra Railway Station.

The display was funded by the South Australian Museum and curated by Professor Rod Wells and staff from the Flinders University.

The Fossilised remains of extinct marsupials were first reported from a dam site at Bundey and along the Baldina Creek in 1889. Amandus Zeitz of the SA Museum visited the area and collected a partial skeleton of Diprotodon australis from Baldina Creek which, at the time, was the most complete specimen known from South Australia predating the finds at Lake Callabonna. They also collected the fossilised remains of the giant ’emu’ Genyornis, the marsupial ‘lion’ Thylacoleo, and the Tasmanian Devil Sarcophilus from Bundey.

The Baldina and Burra Creek fossils occur in fine grained and mudstones. Bones excavated from below the wethered surface sediments are well preserved. The site takes on added significance in that the specimens so far unearthed have been articulated or very closely associated. This implies limited transport and rapid burial following death, accordingly a direct association with any climate proxy record embodied in the encapsulating sediments. These sites are thus suitable for application of multiple dating techniques and isotope fractionation studies, viz. electron spin resonance, optically stimulated luminescence, carbon 14, along with carbon and nitrogen isotopic analyses. In other words there is the potential to place these fossils in both time and environment.

Dating fossil bearing sediments from Burra Creek by John Prescott of the University of Adelaide suggested ages in the range 40-44 ka. Regardless of which dates one accepts, it would appear that the sites fall within the span of human occupation of Australia and are thus of considerable interest to researchers investigating megafaunal extinctions. Today we know of seven fossil yielding localities in the region to the east of Burra.

Professor Rod Wells and Rainer Grun revisited the Burra sites in 2001. During their visit they met an amateur naturalist, Mr Robert Harding of Mongalata. Mr Harding alerted them to further fossil localities in the Redbanks area along Baldina Creek. Subsequent prospecting further downstream revealed many small outcrops of weathered bone and fragments of the distinctive Diprotodon tooth enamel leading ultimately to the discovery of articulated skeletal remains of Diprotodon and a Tasmanian tiger.